The Minnesota Department of Employment and Economic Development (DEED) held a roundtable discussion on broadband access at Nuvera’s Hutchinson office April 13. The event gathered school officials, business owners, community members and broadband leaders to discuss the imperative of expanding affordable access to all people in Minnesota.

While the pandemic accelerated awareness around broadband as a critical service, Nuvera’s CEO Glenn Zerbe pointed to a fundamental change behind what’s driving overall demand. 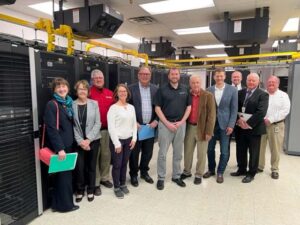 “What’s changed is who creates and sends content,” said Glenn Zerbe, Chief Executive Officer at Nuvera. “It’s not just Netflix creating and sending out content. Content and creativity are coming from the home and it’s changing everything.”

DEED leaders recognized Nuvera’s work to invest and expand broadband access in key parts of the state. The leaders also spoke about Governor Walz’s proposal for $170M to fully connect the state.

“It’s a monumental moment for broadband and Nuvera is a leader in this space,” said DEED Commissioner Steve Grove. “In Minnesota, we have over 240,000 households that still lack internet access, but the good news is we have the money to finish the job.”

School leaders said the issue of access and speed isn’t just about the challenges educators navigated during the pandemic.

“Even now that our schools are back in person our bandwidth demand hasn’t changed, because instruction is permanently changed,” said Hutchinson Schools Superintendent, Daron VanderHeiden. “If a student is marked absent during the day, their teacher may send them a video lesson to view and complete online, not wait until they are back in the classroom.”

Following the roundtable discussion, the group toured Nuvera’s Hutchinson state-of-the art facility that provides local service and is a hub for a statewide fiber network.

Nuvera is beginning construction on a multi-year infrastructure project to bring fiber-to-the-home to many cities it serves. Read about the project at NuveraGigCities.com.